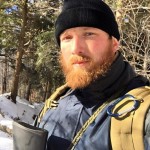 We catch up with our favorite SOFREP Senior Reporter, Alex Hollings and here is the menu of what we cover: