Curt “F18-man” Knowles told me that I needed to have his niece, Peyton Davis, on the program.  I said “ok” (he’s a Battle Buddy so I can’t refuse) and then asked him “why”?  He answered that she’s an incredible person, a country music artist who wants to do a USO Tour and lives with the trauma associated with her father’s suicide. Nuff said.

Peyton Davis is an figure skater, swimmer, bowler, JROTC MSgt (Army type) who shot on her unit’s shooting team, a classically trained singer and now a country music artist.  She joined ALL MARINE RADIO to discuss her journey through trauma and how she’s learned to co-exist with it.

At the end of the interview you’ll hear Peyton’s single “Hurt” that you can find on YouTube YouTube and purchase at Google, Amazon and iTunes.

As you listen to the interview, I hope that you’re struck by how many people are affected by trauma in their lives and what an incredible opportunity that Veterans have to give back once they learn to coexist with it.  So start learning.

Below are some “fun facts” about Peyton Davis: 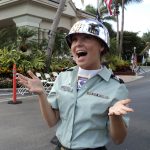