When you comb through footage and audio files of how the battle for the island of Iwo Jima was brought back to the American public, you’ll cross paths with a Marine Combat Correspondent by the name of Alvin Josephy whose voice you will hear twice in a montage of broadcasts that the American people listened to in February and March of 1945.  If you do a search on Alvin Josephy you’ll find an Amazing life, and a Marine who went on to the the most prominent non-native, Native American historian.

We’ll talk about him as we listen to the work he did that was sent home to the American people 74 years ago. 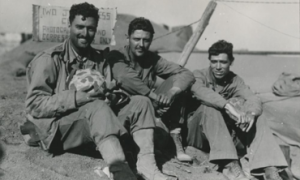