A MESSAGE TO FELLOW VETERANS ON MEMORIAL DAY — LET’S GET AFTER IT: LCpl Ben Lunak, USMC (ret)

Ben Lunak wrote for the first time in his life this past month, he joined ALL MARINE RADIO to discuss his motivation, his subject and the process of writing. A GREAT INTERVIEW! 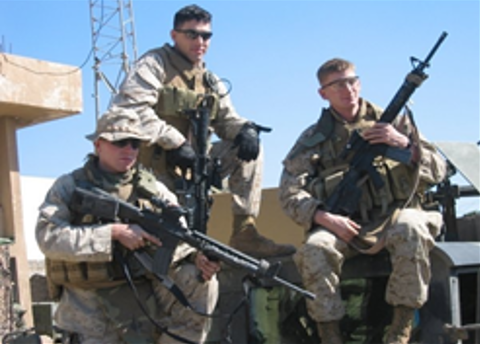 13 years have passed since our HUMVEE was ambushed in Ramadi. I think about Adam “Zee” Zanutto and Adam “Van” Vanalstine everyday. I think about how Van never complained and how Zee possessed a demeanor every leader would envy. Surprisingly, I think about the fear I felt after the bomb was detonated. I have never felt such an overwhelming fear in my life. The fear was so strong pain did not exist. People think the fear stemmed from being mangled and death placing its cloak over me, but I know the fear was the weight of a burden being placed on my shoulders. The burden? Living out a life that reflects my fallen teammates “Van” and “Zee.”

When I was discharged in 2006, I was one of the entitled, lazy, alcoholic veterans with no motivation. All I thought about was how society didn’t understand my situation. When April 2012 came around I was ready to be a statistic, but I called out to God and I heard “hang on.” I hung on realizing the only person who is going to do the work to get me out of the hole is me.

With the help of mentors and my wife, I fixed each part of my broken life, from debt to drinking. I am here to tell veterans who are feeling sorry for themselves, drinking, popping pills and walking around with a victim mentality, recovery is out there if you want it. The number of resources is unlimited, but they require you to get off the couch and work nothing is going to be handed to you.

How do I know I am living a life that reflects Zee and Van’s life? I have worked numerous jobs and attending school. The number one complement I get is when my manager pulls me aside and says “Ben, we have hired veterans in the past. They show up late, complain and have an entitlement attitude, but you come to work motivated with no entitlement attitude and never complain. In fact when you’re encountered with a bad situation, you seem to work harder.”

At least one teacher has pulled me aside at the end of each semester and told me “Ben the veterans who come to my class are lazy, show up late, sit in the back and when I question them they tell me “I am a veteran you owe me my education” or “I am only attending school for the money; why should I try?” Then you came along, sat up front, worked, asked questions and earned an A. One teacher wanted to pull me into the dean’s office and demand the dean gives me an award (I talked him out of the idea).

The time is now where the veterans of our nation need to step up and become the leaders we are. We should be at the top of everything in the workforce. “Veteran” has a few stigmas attached to it, including lazy, psycho and undependable. We need to destroy those stigmas. I know some of you are thinking, well society doesn’t understand what I have been through. That pathetic excuse is no longer valid. The thing you represent as a Veteran is something far greater than yourself.

Think about your brother’s and sister’s who died fighting, so you could come home. They gave their life for your life. You owe it to their families to get after it. I understand the process is hard; I feel the guilt of “Van” and “Zee’s” death everyday. But instead of letting the guilt weigh me down, I turn it into motivation. They died so I can come home and live my life. It’s only right I wake up everyday and slay the day.

Now its time for you to get off your ass and fix yourself don’t waste your brothers and sister’s sacrifice.