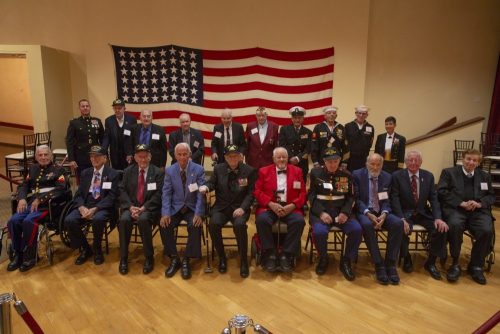 A three-day celebration commemorating the 75th anniversary of the end of battle on Iwo Jima is slated for Feb. 12-16 at Camp Pendleton.

The annual event has been held for three decades and is one of the the largest Iwo Jima reunions of its kind in the country. But this year will be the last time the Iwo Jima Commemorative Committee is planning to hold a formal West Coast gathering of Iwo Jima veterans.

Over the years, the numbers of Iwo Jima veterans has been dwindling — a number have passed away, and many more are in their mid-90s. Some are over 100 years old, like local veterans retired Marine Col. Dave Severance, who will turn 101 next month, and 1st Sgt. John Farritor, who turned 100 last summer.

In 1996, the Iwo Jima Commemorative Committee based out of San Diego was formed and has been conducting an annual memorial service and banquet on Camp Pendleton for Iwo Jima veterans, families, veterans and active-duty and retired military personnel.

In 1999, the Iwo Jima Commemorative Committee built a monument outside the Camp Pendleton Pacific Views Event Center in remembrance of the historic battle.

The Camp Pendleton Historical Society has been working with the Iwo Jima Commemorative Committee to produce an 88-page magazine that will be given to all who attend the banquet on Feb. 15. The publication will contain stories of 36 Iwo Jima veterans, along with articles about the battle, various aspects of the operation and a number of Marine Corps photographs.

The memorial service begins at 4:30 p.m. Feb. 15 at the Iwo Jima monument on the west side of the Pacific View Events Center, and will conclude with a 21-gun salute and Taps.

Doors open for the banquet at 5 p.m. in the ballroom of the Pacific View Events Center. Iwo Jima memorabilia will be on display in the dining hall. The program begins at 6 p.m. with call to order by banquet chairman retired Master Gunnery Sgt. Len Maffioli. The program will close with the late Col. Walter Ridlon’s “empty chair” tribute, the Iwo Jima Flag Tableau and Taps.

Banquet tickets are $40 and free for Iwo Jima veterans. The deadline to purchase banquet tickets is Wednesday. For tickets and more information, email event registrar, Gail Chatfield (author of, “By Dammit, We’re Marines! Veterans’ Stories of the Heroism, Horror, and Humor in World War II on the Pacific Front”; 2008) at gchatsan@gmail.com. For more information, go to iwojimareunion.com.

HERE IS THE FLYER/INFORMATION SHEET