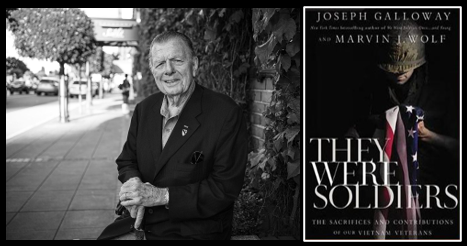 Joe Galloway earned his spurs as a award winning newspaper reporter during the Vietnam War. His New York Times best-selling book, co-written with LTG Hal Moore, USA (ret), “We Were Soldiers Once . . . and Young: Ia Drang—The Battle That Changed the War in Vietnam” is considered a classic in military history.  He joined ALL MARINE RADIO to discuss his career and his newly released book entitled “They Were Soldiers: The Sacrifices and Contributions of our Vietnam Veterans” as well as his thoughts on the Ken Burns documentary “The Vietnam War” (which Joe consulted on) and finally, watching the nation disregard the lessons learned in Vietnam and go to war in Iraq and Afghanistan.

Bronze Star with Combat “V” device:  On May 1, 1998, Galloway was decorated with the Bronze Star with “V” Device.[1] The medal was in recognition of his heroism on November 15, 1965, during the Battle of Ia Drang,[3] the first major battle by U.S. and North Vietnamese troops in the Vietnam War. Galloway was present as a journalist. During the fighting, he risked his own safety to assist wounded soldiers. His actions are depicted in the film We Were Soldiers in which he is portrayed by actor Barry Pepper.

Joseph L. Galloway, one of America’s premier war and foreign correspondents for half a century, recently retired as the senior military correspondent for Knight Ridder Newspapers. Before that he held an assignment as a special consultant to General Colin Powell at the State Department.
He is the co-author of the 2020 book They Were Soldiers: The Sacrifices and Contributions of Our Vietnam Veterans with Marvin J. Wolf, published by Nelson Books. They Were Soldiers features 49 interviews with Vietnam Veterans from all walks of life and focuses on the contributions they made to America after they returned home. It makes a strong case that the men and women who participated in the Vietnam War were every bit the equal to their “Greatest Generation” parents–and that they were certainly the greatest of their generation.
Early in 2013, Galloway was sworn into service as a special consultant to the Vietnam War 50th Anniversary Commemoration project run by the Office of the Secretary of Defense. He was also a permanent consultant to Ken Burns’ Florentine Films project to make a documentary history of the Vietnam War which was initially broadcast in 2017 on PBS.
Galloway, a native of Refugio, Texas, spent 22 years as a foreign and war correspondent and bureau chief for United Press International, and 20 years as a senior editor and senior writer for U.S. News & World Report magazine. He joined Knight Ridder in the fall of 2002.
During the course of 15 years of foreign postings–including assignments in Japan, Indonesia, India, Singapore and three years as UPI bureau chief in Moscow in the former Soviet Union–Galloway served four tours as a war correspondent in Vietnam and also covered the 1971 India-Pakistan War and half a dozen other combat operations.
In 1990-1991 Galloway covered Desert Shield/Desert Storm, riding with the 24th Infantry Division (Mech) in the assault into Iraq. Galloway also covered the Haiti incursion and made trips to Iraq to cover the war there in 2003 and 2005-2006.
The late Gen. H. Norman Schwarzkopf, who first met Galloway in South Vietnam when he was a brand new Army major, called the Texan “the finest combat correspondent of our generation–a soldier’s reporter and a soldier’s friend.”
He is co-author, with the late Lt. Gen. Hal Moore, of the New York Times and national bestseller We Were Soldiers Once…And Young (published by Random House), which was made into the critically acclaimed movie, “We Were Soldiers” starring Mel Gibson. We Were Soldiers Once…And Young is presently in print in six different languages with more than 1.2 million copies sold.
Galloway also co-authored Triumph Without Victory: The History of the Persian Gulf War for Times Books–and in 2008 he and Gen. Moore published their sequel to We Were Soldiers for HarperCollins, the New York Times bestseller We Are Soldiers Still: A Journey Back to the Battlefields of Vietnam.
When Military History magazine polled 50 leading historians to choose the Ten Greatest Books Ever Written on War, We Were Soldiers Once…and Young was among those ten books.
On May 1, 1998, Galloway was decorated with a Bronze Star Medal with V for Valor for rescuing wounded soldiers under fire in the Ia Drang Valley in November 1965. His is the only medal of valor the U.S. Army awarded to a civilian for actions in combat during the entire Vietnam War.

Galloway was awarded the 2011 Doughboy Award, the highest honor the Army’s Infantry can bestow on an individual. Few civilians have ever received a Doughboy. On Veterans Day, 2011, he received the Legacy of Service Award of the Vietnam Veterans Memorial Fund.

Galloway is a member of the boards or advisory boards of the Vietnam Veterans Memorial Fund, the 1st Cavalry Division Association, the National Infantry Museum, the School of Social Studies of The Citadel in Charleston, S.C., the Museum of America’s Wars, and the Military Reporters and Editors Association.

Galloway is the recipient of honorary doctorate degrees from Norwich University and Mount St. Mary’s College of Newburgh, N.Y.

He now resides in Concord, N.C., with his wife, Dr. Grace Liem Galloway.