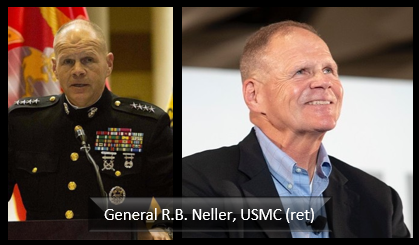 The 37th Commandant of the Marine Corps published “A Letter to America” last week — he joined ALL MARINE RADIO to discuss why he wrote it and what he hopes will be achieved by publishing his thoughts.  Neller is no stranger to leadership on “white hot” issues as he led the Marine Corps during the politically charged “Marines United” controversy in which Marines were accused of posting compromising images of female Marines online in a private group.  We’ll talk about leadership lessons learned during that period and his challenge to white and black Americans, to law enforcement officers and leaders.

BOOK:  The Anatomy of Courage: The Classic WWI Study of the Psychological Effects of War by John Moran (Author)

“Ships that pass in the night, and speak each other in passing, only a signal shown, and a distant voice in the darkness; so on the ocean of life, we pass and speak one another, only a look and a voice, then darkness again and a silence.”

As a white American, a baby boomer child of the 60’s and a veteran of 44 years of service as a US Marine I felt both frustration, anger and great sorrow as I watched the video of the killing of George Floyd by a group of police officers in Minneapolis.  I cannot get out my mind the lack of emotion on the faces of the officers as Mr. Floyd said repeatedly, “I can’t breathe.”  And all this transpiring while others called out for the officers to let him up, though none physically intervened.   At the same time, it is with some understanding but again sadness I watch the destruction of neighborhoods in our Nation as demonstrators, most local citizens, but including some professional agitators, express their anger and frustration over another killing of a black man by police that, to the great majority of Americans it was clear, did not have to die. At the same time some violate the law by attacking police, looting and burning businesses in their communities, many of which are unlikely to return or rebuild. You are justifiably angry.

So, what do we do now? …. Continue as we have like Longfellow’s two ships in the night?  Wait for the rage to pass, as eventually it will, and then go back to whatever normal is in our COVID world of today?  Do we as white Americans just take comfort in our own view that “I am not a racist and I raised my children to judge people by the color of their heart and character and not the color of their skin, their religion or their sexual preference? ” In other words, like most Americans of all races/ethnicity, remain supportive of the intent of the demonstrations, but also remain publicly, silent taking  comfort in our own actions to be a man or woman of virtue, equality and character and hope and pray that over time things will get better?

I am sure that today this is not enough.

The time for being silent has passed, at least for me.

I have many friends in the law enforcement profession and have interacted personally and professionally with many Police Officers and emergency responders, a great number of whom are military veterans. They have an incredibly difficult job dealing with in many cases people who have broken the law, are under the influence of substances, who are abusive of or threaten them, all while they have to remain calm, disciplined and measured in their response. Like our forces in the combat, young men and women, who are trained well,  but over time get tired and worn down, every day facing life threatening situations, sometimes at personal risk to their safety and of those with them, the great majority of police get it right the great majority of the time. But we demand, unrealistically, they get it right every time…. Sadly, history and reality tell us “they will not.”

We can train and re-train over and over, and though we must continually review how law enforcement train and assess its effectiveness, but humans are human.  And because we are human we bring our personal prejudices with us in our life, both personally and professional.

Nevertheless, our law enforcement personnel, like our military, are guided and governed by rules and laws, which we have taken an oath to obey.  When they do not, just like the military, they must be held accountable.  That is part of the job.  At the same time, all of us are accountable for our own actions, or lack of action, when we see things that we know are illegal, immoral or just simply wrong.

So how do we “operationalize” these words …. Make them become action.  How do we make the aftermath of the death of George Floyd different?  A turning point for change in our Nation.  How do we all change our views on race to become what our Constitution says is the basis of our national culture, values and society… a Nation for the People, by the People, of the People? So we are not having this same discussion again?

That is the hardest part.  We will hear many words about improving policing, on maintaining law and order, about being more empathetic to our fellow citizens.  Just as we have before.  And I am not naïve enough to think that these words will change something that is deeply rooted in our culture which started the day the first African slave was brought to what we know as America.  We have been dealing with the race issue for centuries.  We have had a national civil war, amendments to our Constitution, Reconstruction, Jim Crow, integration of our military and the great civil rights struggle lead by Dr. King.  We don’t even know our history so if we don’t know where we have been how do we know where we are going?  But here we are …. a Nation afraid of each other and unable to address directly and effectively the racial views that cut across, all groups, all ages and  all sides of the discussion.

So, I would suggest the following thoughts for consideration to all of us in whatever group we identify with in this struggle ……and it is a struggle since it will not end either today or get better tomorrow without effort.

To White Americans.  Even though you believe you are not racially prejudiced and that you raise your children to judge others by their actions and values not their ethnicity, you have to try as best you can to understand the views of people of color who are just tired of the real injustices they live with every day.  Things that you either have not seen or cannot see.  They are their reality and if you would speak to any man or woman of color and ethnicity about their experiences, they will tell you their story.  Listen and change.

To Black Americans.  Your anger is understandable and justified.  How many more black men have to die for inexplicable reasons?  That said, your critics will say that violently breaking the law is not acceptable and they are right.  So, protest peacefully, and loudly, but do not let others take your message and turn it against you.  The great majority of America hears and agrees with you.

For law enforcement.  You have a very difficult job. We cannot pay you, like teachers and all the workers who make the Nation work, what you are worth.  Every day on the streets dealing with those who either are criminals, under the influence of alcohol and drugs or just those who want to confront you as a symbol of authority.  Continue to do your duty with the professionalism and dedication the great majority of you do every day.  But if you get angry or frustrated in a situation remember you can just walk away. And even more importantly,  if you see a fellow officer who is not complying with the law or acting in a way that you know is wrong …. Don’t stand there…. Engage and stop it.  You know who has these beliefs and attitudes in your force.   You must get them to change or leave.   Always use the minimum force to counter any threat.  Stay safe out there.   Protect and serve.

To the racists in America.  For the record, things will not go backwards in this country.  America is great but because we move forward and get better… socially, economically, culturally, educationally …. In all ways.  We are not going back to the “way it was.”  I accept that there is likely nothing that I can say to change your views but understand that this a Nation of laws and your views are not in compliance with same. You are on the wrong side of history.  I pity you.

To our National leaders, both politically and culturally.  Continue to speak out for justice and fairness.  At the same time work to address the conditions of any group in the  Country who is disadvantaged by any reason.   You cannot make everyone in the Country succeed but we must create opportunities for success not conditions for failure.  Life is hard and all Americans expect to work hard … but don’t make it harder than it is.

I could go on and address social media, the media, and those on the far left and the far right.  For the latter two, there is sadly likely nothing I can say to make them moderate their views.  But each are a small minority but a vocal one.  We who are the majority of all races, ethnicities and genders must stand up for what is right and reasonable. Protecting right of free speech and peaceful demonstration and not tolerating the destruction of lives and property.  We know what happened in Minnesota to George Floyd was not right.  He deserved better.  And his death like those of too many others needs to count for something.  We are better than this.  Stand up for what is right.  We can no longer be ships in the night and just move on.  Love and protect your neighbor.   Stay safe.