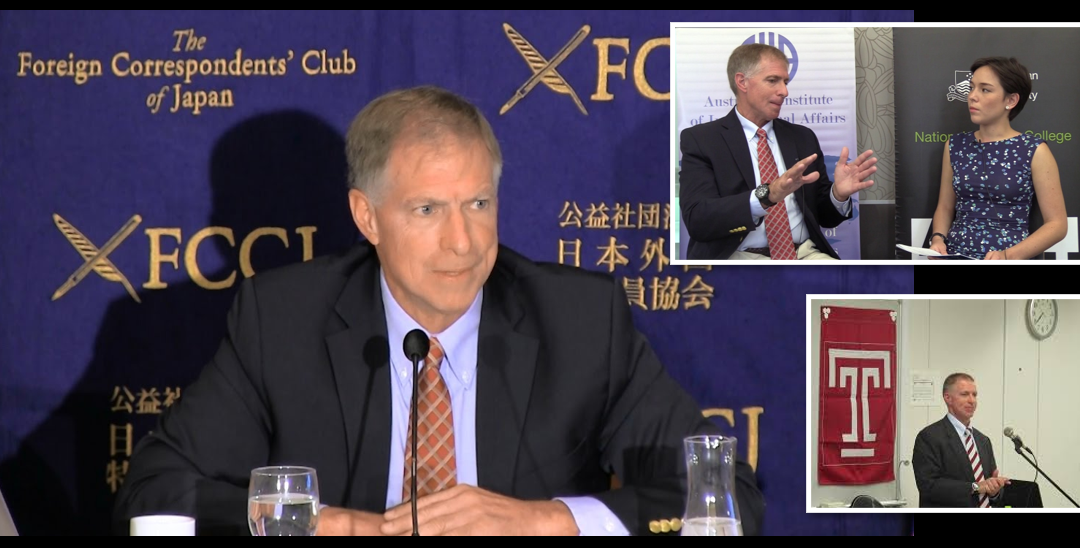 Grant Newsham is a senior research fellow at the Japan Forum for Strategic Studies, a senior research fellow at the Center for Security Policy and a retired United States Marine Officer. He was the first US Marine liaison officer to the Japan Ground Self Defense force and was instrumental in promoting the JSDF’s initial moves towards an amphibious capability.  He joined ALL MARINE RADIO today to talk about his latest column entitled:

In reality, Trump has moved US closer to India, Japan, Australia and Southeast Asian allies than his predecessor ever did

By some assessments, Donald Trump – aka the destroyer of America’s bilateral alliances in Asia – has torpedoed Washington’s position in the region, leaving in his wake waves of reputation damage and mistrust.

But it’s worthwhile recalling the supposed region-wide esteem in which the United States was held before Trump took office.

In early 2013, I spoke at a symposium in Tokyo about the South China Sea. Another speaker described the People’s Republic of China’s recent seizure of Scarborough Shoal in Philippine maritime territory. The senior Philippine military officer sitting next to me said quietly – and despairingly – to himself, “There was nothing we could do.”

What he did not say, but no doubt was thinking, was: There was plenty the US could have done but hadn’t.

The Chinese occupied Scarborough Shoal despite having promised Assistant Secretary of State for East Asia Kurt Campbell that they would withdraw their ships. Then Washington explained to Manila how the US-Philippine Defense Treaty, which the Filipinos thought applied to the situation, really didn’t apply.

And then the Americans encouraged the Philippines to sue China at the Permanent Court of Arbitration. After the court ruled overwhelmingly in the Philippines’ favor, the Barack Obama administration did absolutely nothing.

In fact, Obama’s national security advisor and the chief of naval operations visited Beijing soon afterward and refrained from even mentioning the PCA ruling, in hopes the Chinese would appreciate the gesture. They didn’t.

US President Barack Obama on September 5 called a planned meeting with Rodrigo Duterte into question after the Philippine leader launched a foul-mouthed tirade against him.

In 2016, ahead of an Association of Southeast Asian Nations (ASEAN) meeting that both would attend, reporters asked Philippine President Rodrigo Duterte what message he wanted to send to Obama.

Proclaiming, in Duterte-speak, that he would not accept a lecture from Obama about his deadly war on drug suspects, Duterte said, “You must be respectful. Do not just throw away questions and statements. Son of a whore, I will curse you in that forum.”

Duterte moved his country closer to the People’s Republic of China. And it wasn’t just the Philippines.

There was also Thailand – one of America’s oldest treaty allies and strongest friends in the region. In 2014, as is its wont, the Thai military staged its umpteenth coup.

The Obama administration went out of its way to humiliate the Thai regime. Assistant Secretary of State for East Asia Danny Russel even traveled to Bangkok and gratuitously and repeatedly insulted the Thais.

Meanwhile, Washington had no such problems with a coup in Egypt that happened a little earlier. Indeed, Obama even seemed to support it. The Thais took notice and moved closer to the PRC.

And there was more: Taiwan knew that the Obama administration regarded it as an irritant to the more important US-PRC relationship, and wished the free people on Taiwan would quietly accept PRC enslavement.

And by 2016 the Chinese had taken de facto control of the South China Sea – despite Xi Jinping’s assurances to Obama that they would not.  American retribution?

None. Indeed, the marching orders at Pacific Command when it came to aggressive Chinese behavior during the Obama years were to “deescalate” and give the PRC “off-ramps.”

Don’t think other countries didn’t notice. Ah, yes, those were the good old days for US prestige in Asia.

And then Donald Trump came along and ruined everything.

Before long the Japan Self Defense Forces were out and about in more places and more often than ever. Even the South Korean Navy has done joint exercises with the Japanese, American and Australian navies.

India and America started to act like real allies for the first time since anyone can remember.

The Quad – an informal military tie-up among Japan, Australia, the US and India – actually started to seem like a military tie-up rather than a figment of Japanese Prime Minister Abe’s wishful imagination. The Indians even invited the Australians to the Malabar Exercise for the first time in 13 years.

The Australians? They’ve become even better allies – once they got over Trump’s all-too-human response on learning of a refugee resettlement agreement with Canberra that Obama had bequeathed him.

Taiwan finally feels like it has a friend in Washington – and Taiwanese diplomats no longer have to meet US officials at the Starbucks around the corner from the State Department building.
US naval and air forces are operating in the South China Sea regularly and in more force than ever. US Navy ships regularly transit the Taiwan Strait.

The Americans started getting a bit closer to Vietnam.

A few of the ASEAN states – Indonesia, Malaysia, the Philippines and Vietnam – have recently cited the Permanent Court of Arbitration ruling to challenge Chinese efforts to take their ocean territory – rather than knuckling under and hoping the PRC leaves them alone.

One doesn’t do that unless there’s at least a hope the Americans are going to be around and are serious.

As for the Philippines, Rodrigo Duterte still hasn’t called Trump a “son of a whore.” Nor has he expelled US forces from the Philippines. In fact, he retracted an order to cancel the Visiting Forces Agreement, the absence of which would have made it difficult for US troops to operate in the country.

And the Trump administration, unlike its predecessors, has discovered the Federated States of Micronesia, the Marshall Islands, and Palau.

Tiny nations indeed, but occupying strategic terrain. President Trump invited their leaders to the White House and Mike Pompeo stopped off for a visit in Micronesia, a first for a sitting secretary of state.

The “compact agreements” with each state are being renegotiated for extension – and Palau recently invited the US military to set up bases and operations in the country.

And the neighborhood bully, the PRC, finally has some doubts as to whether the Americans will automatically “de-escalate” should Beijing throw its weight around.

Indeed, the great transactionalist from Queens, New York, still has neither removed any troops from Asia nor otherwise reduced forces.

How much more evidence does one need of Trump ruining things for America in Asia?

Grant Newsham, a retired US Marine Corps officer and former US diplomat, currently is a senior research fellow at the Japan Forum for Strategic Studies and the Center for Security Policy.