NEWS & COMMENTARY: why can’t counties count votes in a timely manner? Our voting system once again doesn’t inspire confidence… and the media?! 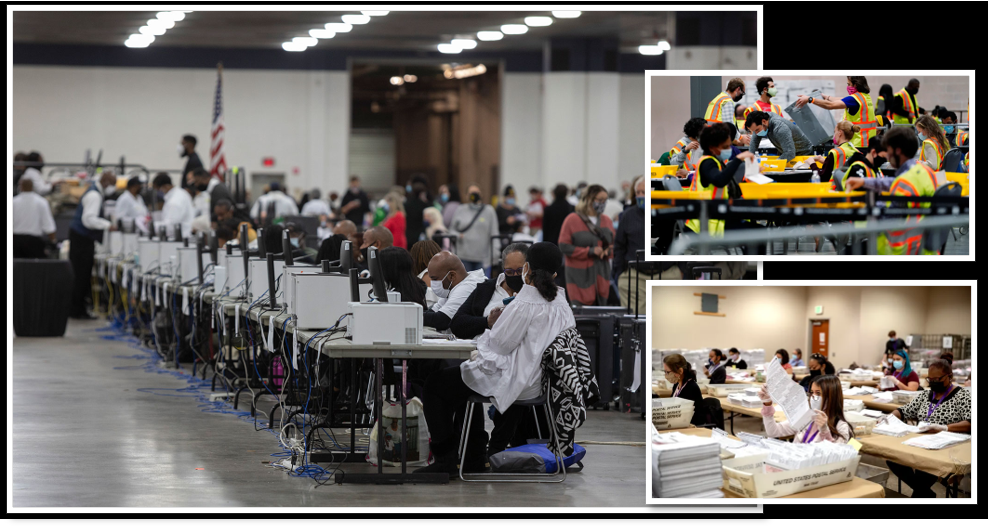 The U.S. Inability To Count Votes is a National Disgrace. And Dangerous.

The richest and most powerful country on earth — whether due to ineptitude, choice or some combination of both — has no ability to perform the simple task of counting votes in a minimally efficient or confidence-inspiring manner. As a result, the credibility of the voting process is severely impaired, and any residual authority the U.S. claims to “spread” democracy to lucky recipients of its benevolence around the world is close to obliterated.

At 7:30 a.m. ET on Wednesday, the day after the 2020 presidential elections, the results of the presidential race, as well as control of the Senate, are very much in doubt and in chaos. Watched by rest of the world — deeply affected by who rules the still-imperialist superpower — the U.S. struggles and stumbles and staggers to engage in a simple task mastered by countless other less powerful and poorer countries: counting votes. Some states are not expected to finished their vote-counting until the end of this week or beyond.

The same data and polling geniuses who pronounced that Hillary Clinton had a 90% probability or more of winning the 2016 election, and who spent the last three months proclaiming the 2020 election even more of a sure thing for the Democratic presidential candidate, are currently insisting that Biden, despite being behind in numerous key states, is still the favorite by virtue of uncounted ballots in Democrat-heavy counties in the outcome-determinative states. [One went to sleep last night with the now-notorious New York Times needle of data guru Nate Cohn assuring the country that, with more than 80% of the vote counted in Georgia, Trump had more than an 80% chance to win that state, only to wake up a few hours later with the needle now predicting the opposite outcome; that all happened just a few hours after Cohn assured everyone how much “smarter” his little needle was this time around].

Given the record of failures and humiliations they have quickly compiled, what rational person would trust anything they say at this point? A citizen randomly chosen from the telephone book would be as reliable if not more so for sharing predictions. And the monumental failures of the polling industry and the data nerds who leech off it, for the second consecutive national election, only serve to sow even further doubt and confusion around the electoral process.

A completely untrustworthy voting count is now the norm. Two months after the New York state primary in late June, two Congressional races were in doubt by what The New York Times called “major delays in counting a deluge of 400,000 mail-in ballots and other problems.” In particular:

Thousands more ballots in the city were discarded by election officials for minor errors, or not even sent to voters until the day before the primary, making it all but impossible for the ballots to be returned in time.

It took a full six weeks for New York to finally declare a winner in those two primary races for Congress.

The coronavirus pandemic and the shutdowns and new votings rules it ushered in have obviously complicated the process, but the U.S. failure to simply count votes with any degree of efficiency, in a way that inspires even minimal confidence in the process, pre-dates the March, 2020 nationwide lockdowns. Even if one dismisses as aberrational the protracted, Court-decided, and still-untrusted outcome of the 2000 presidential election — only four national election cycles ago — the U.S. voting process is rife with major systemic failures and doubt-sowing inefficiencies that can be explained only as a deliberate choice and/or a perfect reflection of a collapsing, crumbling empire.

Recall the mass confusion that ensued back in January, in the very first Democratic Party primary election in the Iowa caucus, where a new app created and monetized by a bunch of sleazy Democratic operatives caused massive delays, confusion and an untrustworthy outcome. Later in the process, many Super Tuesday states — including California — were still counting votes weeks or even longer after the election was held (more than a week after the Democratic primary, California had still only counted roughly 75% of the ballots cast, depriving Bernie Sanders of a critical narrative victory on election night).

The 2018 midterm elections were also marred by pervasive irregularities. The Washington Post noted “thousands of reports of voting irregularities across the country…. with voters complaining of broken machines, long lines and untrained poll workers improperly challenging Americans’ right to vote.”

Voter suppression in NY is rampant and repressive. @NYGovCuomo is acting in the interests of Wall St, Big Pharma, and luxury developers by allowing 1.8 million New Yorkers to languish without representation. Right in line with GOP tactics to suppress ppl of color at the polls. https://t.co/fsUaixkqrv

By not calling a special election, Cuomo has virtually ensured that 1.8 million NYers (according to @NYPIRG) will be without representation during this year’s budget negotiations https://t.co/AWoMuzkXd2

And the full extent of the “irregularities” and treacherous outright cheating by the Democratic National Committee in the 2016 primary race between Clinton and Sanders was never fully appreciated given how pro-Clinton the press was. As just one example, “200,000 New York City voters” — many in pro-Sanders precincts — “had been illegally wiped off the rolls and prevented from voting in the presidential primary” (for one of the best-documented histories of just how pervasive were the shenanigans and cheating in the 2016 Democratic primary across multiple key states, listen to this TrueAnon episode).

However one wants to speculate about the motives for all of this, one thing is clear: it does not need to be this way. To eliminate all doubts about that fact, just look at Brazil.

Brazil is not a small country. It is the fifth most-populous nation on the planet. Although its population is somewhat smaller than the U.S.’s (330 million to 210 million), its mandatory voting law, automatic registration, and 16-year-old voting age means the number of ballots to be counted is quite similar (105 million votes in Brazil’s 2018 presidential election compared to 130 million votes in the 2016 U.S. presidential election). And on the same date of its national elections, it, too, holds gubernatorial and Congressional elections in its twenty-seven states.

And yet Brazil — a much poorer and less technologically advanced country than the U.S., with a much shorter history of democracy — holds seamless, quick vote counts about which very few people harbor doubts. The elections are held on a Sunday, to ensure as many people as possible do not have work obligations to prevent voting, and polls close at 6:00 p.m.

For the 2018 presidential run-off election that led to Jair Bolsonaro’s victory, 90% of all votes were counted and the results released by 6:00 p.m. on the day of the election: the time the last state closed its polls. The full vote tally was available within a couple of hours after that. The same was true of the first-round voting held three weeks earlier — which also included races for governor, Senator and Congress in all the states: full vote totals were released by computer shortly after the polls closed and few had any doubts about their accuracy and legitimacy.

Hundreds of millions of Americans went to bed on Tuesday’s election night seeing Trump in the lead in key states, with the data experts of major outlets indicating that his victory in many of those states was highly likely. They woke up to the opposite indication: that Biden is now a slight favorite to win several if not all of those remaining key states. But what is clear is that it will be days if not longer before the votes are fully counted, with judicial proceedings almost certain to prolong the outcomes even further.

No matter what the final result, there will be substantial doubts about its legitimacy by one side or the other, perhaps both. And no deranged conspiracy thinking is required for that. An electoral system suffused with this much chaos, error, protracted outcomes and seemingly inexplicable reversals will sow doubt and distrust even among the most rational citizens.

The next time Americans hear from their government that they need to impose democracy in other countries — through wars, invasion, bombing campaigns or other forms of clandestine CIA “interference” — they should insist that democracy first be imposed in the United States. An already frazzled, intensely polarized and increasingly hostile populace now has to confront yet another election in the richest and most technologically advanced country on earth where the votes cannot be counted in a way that inspires even minimal degrees of confidence.

My analysis of the election itself, and the ongoing, systemic failures of the Democratic Party — no matter the outcome — will be posted later today.