The toughest person I know is my older sister Peggy 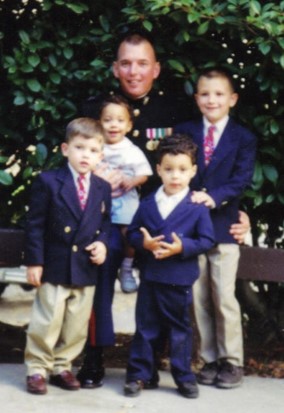 In September of 1996 two of my nephews, the only sons of my older sister Peggy (Torii and Tyler), were murdered when their father shot and killed them both after learning my sister was leaving him, the husband then killed himself.

Of all the things that I have seen in my three combat deployments to Iraq and Afghanistan, the murder of Torii and Tyler is by far the worst.  Nobody I know, who deals with post-traumatic stress, deals with the horror that my sister has dealt with for twenty-one years.

All these years later, I still speak about domestic violence whenever I’m asked because I feel the need to honor the memory of Torii and Tyler and the courage of my sister.  The message:  don’t be afraid to ask someone if they need help, don’t be afraid to broach the subject, don’t shy away from it; as easily as you’d pick up someone’s car keys from a bar, talk to them about domestic violence and getting help.