WE DON’T TALK ABOUT THE WAR… SO MANCHESTER & SLEDGE WROTE: Mac & Ken Rodgers

END_OF_DOCUMENT_TOKEN_TO_BE_REPLACED

THE VIETNAM EXPERIENCE, OUR DEFINITION OF “COMBAT” AND GENDER INTEGRATION IN OCCUPATIONAL SPECIALTIES THAT INVOLVE “INTENSE COMBAT”

As I was waxing eloquent about how humbling it was to watch what Marines did at Con Thien in the PBS series entitled “The Vietnam War” a friend of mine, a smart one at that, called the program to talk about how we define “combat” and whether our “modern definition” contradicts 400 years of combat history but allows our civilian leaders to gender integrate military occupational specialties that involve “intense combat” and should NOT be integrated.

END_OF_DOCUMENT_TOKEN_TO_BE_REPLACED

KEEP YOUR HONOR CLEAN: My Lai — News Reports on the Trial of LT William Calley 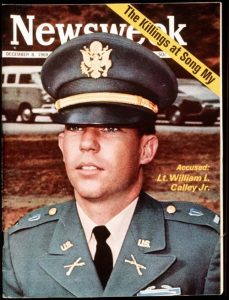 We continue our look at the My Lai massacre with a look at the General Court Martial of 1LT William Calley, U.S. Army.  The news report you will hear chronicles the trial and some of the significant testimony of that was presented.